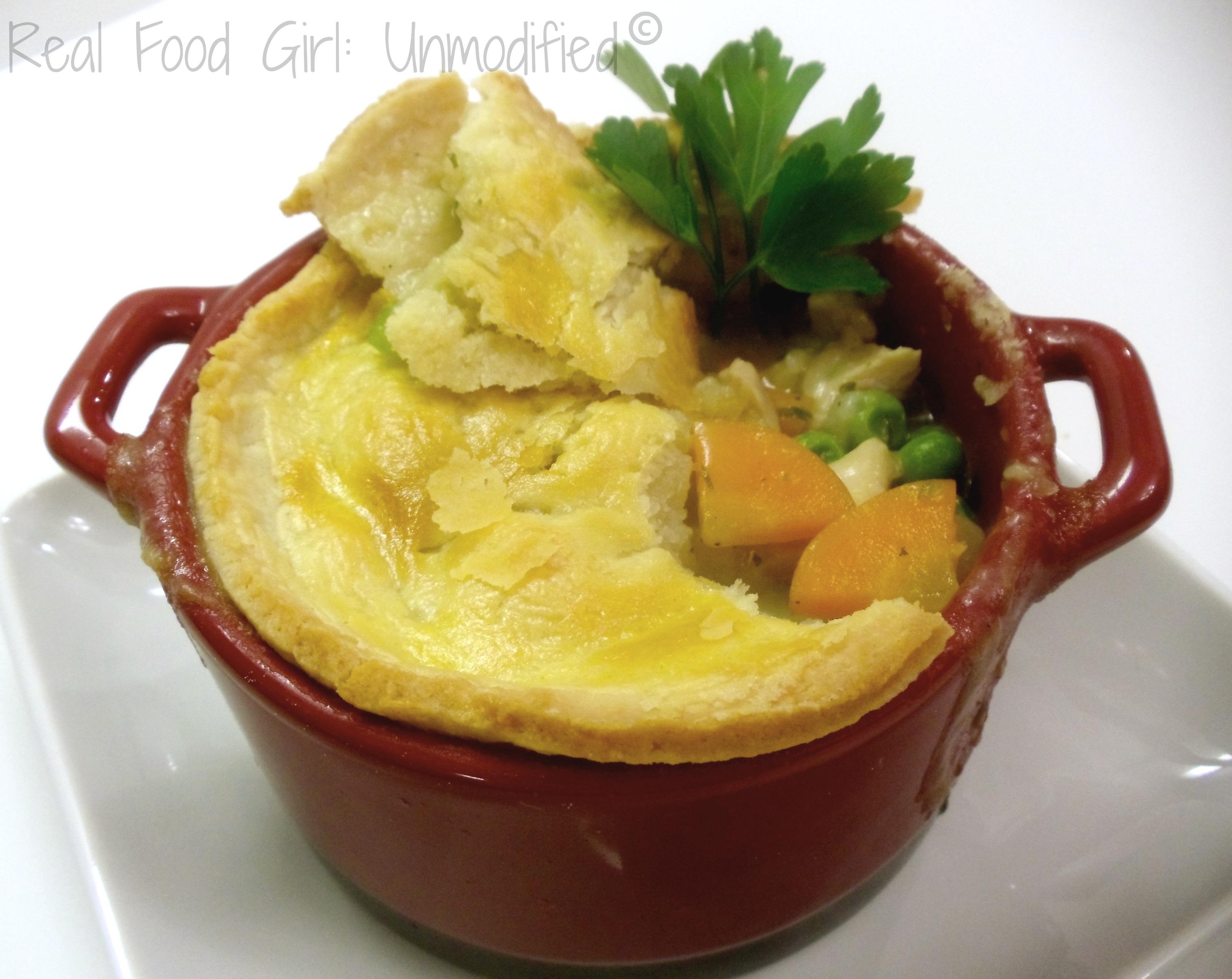 Today seemed like a good day to get my French on, and share my chicken pot pie recipe with you!  Everyone needs a solid chicken potpie recipe in his or her arsenal and this is one such recipe.  What makes it special and a little out of the ordinary, (and a little French) is the addition of Herebs de Provence in the Velouté.

Did I lose you?  Just in case, let me bring you up to speed.   Herbes de Provence (the correct French spelling) or Herbs de Provence is a full-bodied mixture of herbs made popular in the southeastern region of France called Provence.  Spice companies coined the term Herbs de Provence in the 1970s when they started selling the blend of spices for commercial use.  Typically Herbs de Provence contains thyme, rosemary, oregano, savory, marjoram, basil, bay leaf, fennel seed, chervil, and lavender flowers.  You can find blends without the lavender flowers, but I quite like them.  I’ve read that Americans added lavender and that you won’t find it in the spice blends that originate from France, but I know a Chef that was born and raised in Provence, France and he said true Herbe de Provence contains lavender.  Regardless, I’ve learned to never argue with the French.  I’d have more success trying to nail Jell-o to a tree.

A Velouté (vuh lou tay) is one of the five mother sauces. It’s a stock based sauce thickened with a roux, which is equal parts fat, and flour. These five sauces are a sta­ple in tra­di­tional French cui­sine. Each of these five sauces serves as the base for smaller, deriv­a­tive sauces, which we call *small sauces*.  The five mother sauces are: Hollandaise, Espagnole, Velouté, Béchamel, and Tomato sauce.

A velouté is nothing more than velvety smooth gravy.  Don’t tell the French I said that.  They’re hell bent on making everything they do sound tedious and impossible in an effort to keep American’s away from their recipes because they don’t want any competition.  No joke!  Actually, that’s not true. I just enjoy picking on the French.  I used to mock the French using a French accent, while making French recipes while attending a French culinary school.  I’d be reading a recipe and say something like “Why of cuhorss, why wouldz we vant tzo make zis eezy ohn peopelz?  “Nah, ve shall make zis sew haahrd on zos stoophead Amerycahns zat zay shall run crying to zare mozars.”   Or something like that.  One of my instructors, who happened to be French, would come over and listen to me talk to myself as I tried to interpret the recipes while speaking in this accent and would just laugh at me.   I think he enjoyed the entertainment value that my one woman cooking show brought to his classroom.

This recipe comes together quickly after a little bit of prep work. Feel free to use a bag of frozen, organic mixed veggies.  I’m not a snob when it comes to frozen veggies.  They are typically picked at the peak of ripeness/freshness and are flash frozen immediately.  If you prefer using fresh produce, go ahead and cut all your veggies the same size, 1/2″ cubes/dice works best for potpies.  Add the veg to salted boiling water and cook for 2-3 minutes TOPS.  Remove from water and plunge into an ice bath.  Drain and set aside.  For the potatoes, cook in salted, boiling until just tender (they’ll finish cooking in the oven), drain and set aside.

I’ve loved potpies ever since I was a kid.  My Grandma used to make those Swanson’s pot pies on occasion when my little sister and I used to spend the night.  There is just something about a flaky, buttery crust, and a rich, gravy-like sauce and those tender veggies and juicy chunks of chicken, or turkey.  Next to Macaroni and Cheese, I’d say this is one of my top 5 favorite comfort foods.  To me, this is soul food.  This is the kind of food that can heal you.  Once you make this recipe a couple of times, you’ll be able to whip this up in no time!  I’ve increased the recipe a bit so that you can end up with extra for a future dinner.  If you freeze it, keep in mind you’ll need to use it within a couple of weeks because sometimes the potatoes get a bit grainy after they’ve been frozen.  Just cool it completely first, then freeze.  I’d say use within a month, tops.

When I don’t have extra homemade piecrust in my freezer, I will use a boxed organic piecrust.  It’s not always easy to find one that doesn’t contain at least one ingredient from my Real Food Rules list, but sometimes a girl just wants a darn potpie!  Don’t be messin’ with a woman who needs her pot pie fix people. It’ll get U-G-L-Y if ya do!

You will need a quart of homemade chicken stock on hand.   By now you should know that it’s best to always have this on hand.  I try to make a batch of this every 2-4 weeks.  I have a great recipe right here.

I’m going to break a few rules and tick off French Chefs everywhere and we’re not going to use a Boquet Garni- which are herbs and spices tied in a cheesecloth used to flavor soups, stews and sauces in our Velouté sauce, and we’re also going to add a little cream to the sauce because we can.  Heck, we’re already using about half a stick of butter in the roux; we might as well live it up a bit, like the French and add a little cream to the sauce.  Mmmm.  Creeammm.   (Snarky French Chef:  “Whaaaa?  Zis ees a trahj uh dee!  Howa can yew eevin zink uhbowt defiling ze parfect way of zee Frahnch?  Uh, I spit upon yew!  Yew are a mockery to zee Frahnch way oov kooking.  Yew are ze traitor, yew ahr dead to meh and psthp… I shall spit on yew, Escofier iz ralling ovair in hiz grahv becawse of yew!“)
Yeah- don’t tell anyone we’re taking some creative licensing with this “gravy”… You might just have a Snarky French Chef show up in your kitchen out of thin air.  If it can happen to Alton Brown, it can happen to you and me!

Oh, you can prep these veggies a day in advance if you’re using fresh.  Just make sure you put the taters in some water and add a little water to the carrots as well and they’re ready to be par-boiled.  Lastly, this should make enough for 4 single serve potpies (my ramekins are 14-ounces, which will hold 1-3/4 cups) and you should have a few cups left over for a future meal.

I should teach you the general rule of thumb when it comes to a roux.  Cold roux-hot liquid and Hot roux-cold liquid.  With this recipe, the liquid will be cold or about room temp, and your roux will be hot because you have to cook it a bit.  Whisk fast to eliminate ANY lumps.  You can always strain it through a fine mesh strainer if needed. 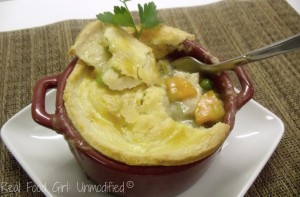 For the Velouté sauce-

For the Pot Pies-

For the Roux, Velouté & Filling- 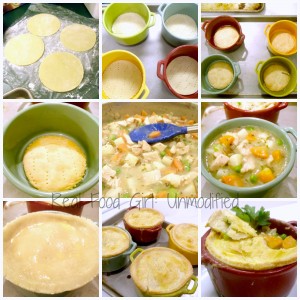 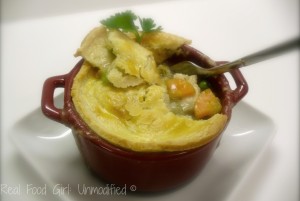 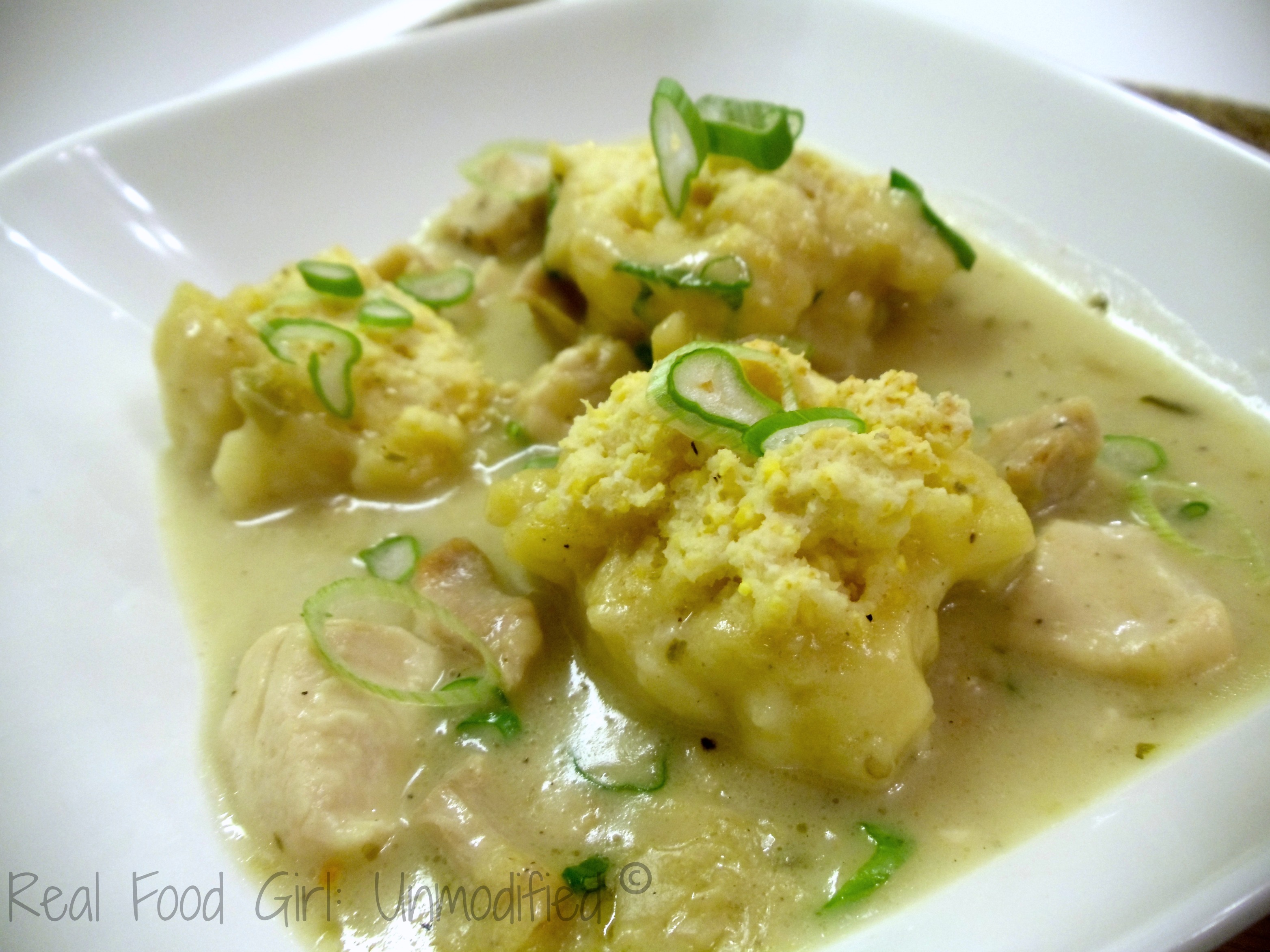 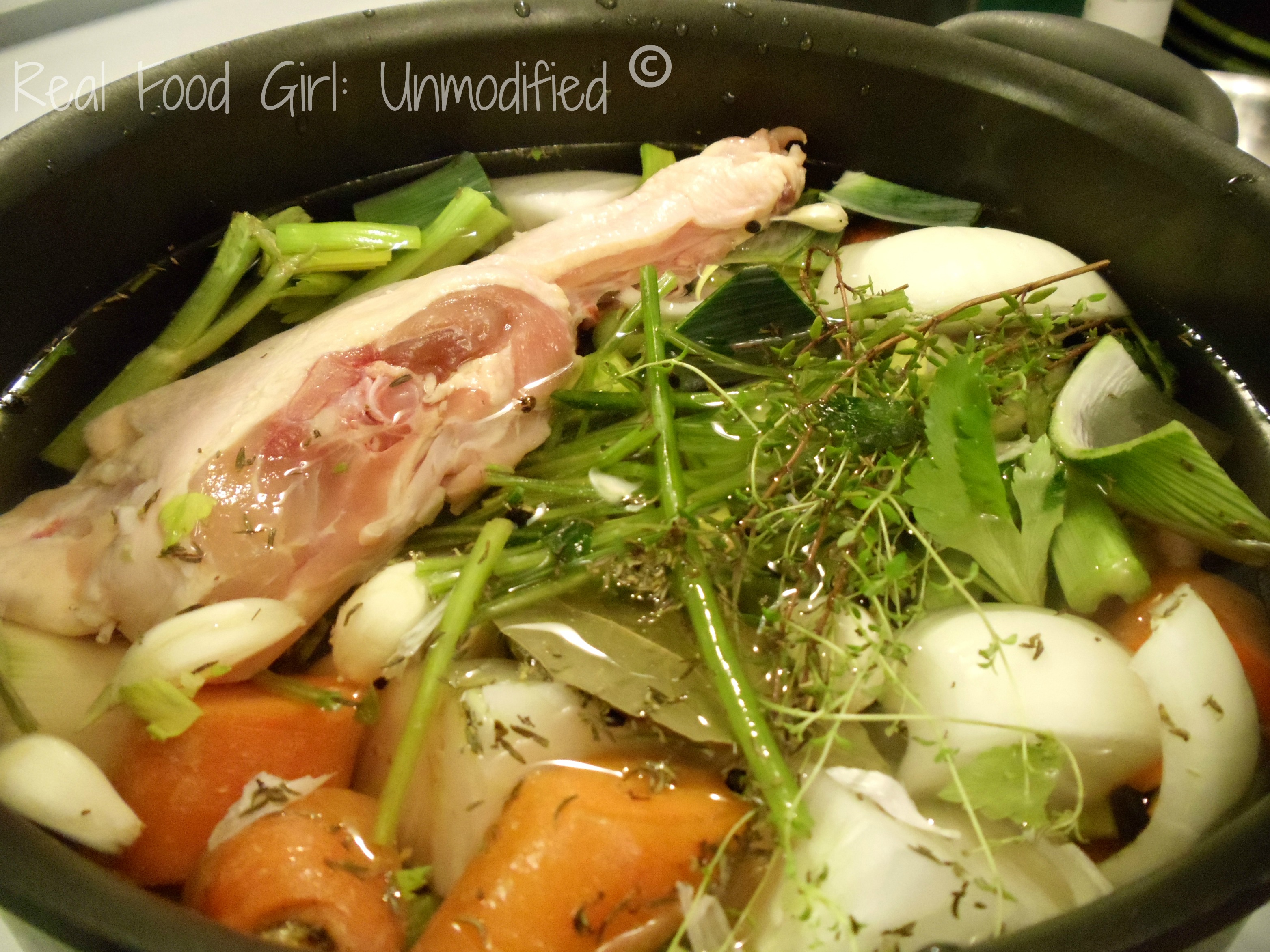 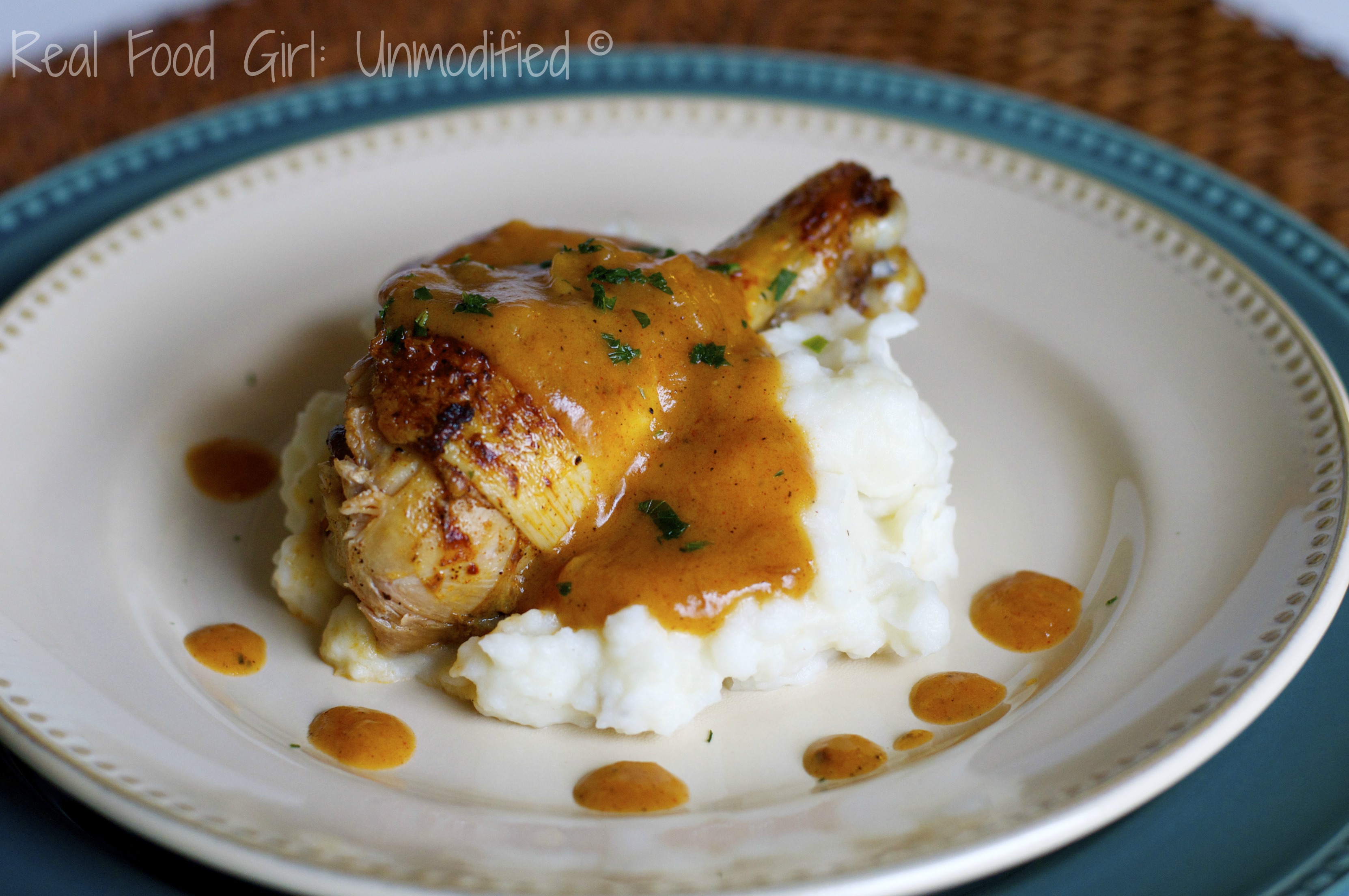