Soy is the mullet hairstyle of the food world. You either hate it or you love it. Today I’m going to talk about Soy.  I wanted to inform you on the types of soy to avoid and the types of soy that are actually beneficial to consume. There is so much data available to wade through online and from the media today, regarding soy, and I’ve done my best to find a healthy balance between the ‘anti-soybean’ camp and the ‘soybeans rock’ camp.

I believe when soy was introduced as a major ingredient in processed foods in the early 90s it was the catalyst to the beginning of my health issues.  Soy (more specifically GMO soy)  has wreaked havoc on my body and I’ve spent the last 10 or so years trying to fix what it’s done to me.

The majority of mainstream Americans would say that they believe soy to be healthy. That they have heard it lowers LDL cholesterol, reduces your risk of heart disease, contains healthy Omega-3 Fatty Acids, and that it will protect you from a myriad of various cancers and possibly osteoporosis and even reduce asthma.

Thanks in part to very clever and shrewd marketing tactics, who can blame America for thinking some or all of those things about soy.  Heck, I did. However, believing these things about soy could possibly cause several health issues down the road for you if you continue to consume unfermented soy products. In fact, from 2000 to 2007, U.S. food manufacturers introduced more than 2,700 new soy-based foods onto grocery shelves.  2,700! That’s insane! Wouldn’t you agree?  Yikes! 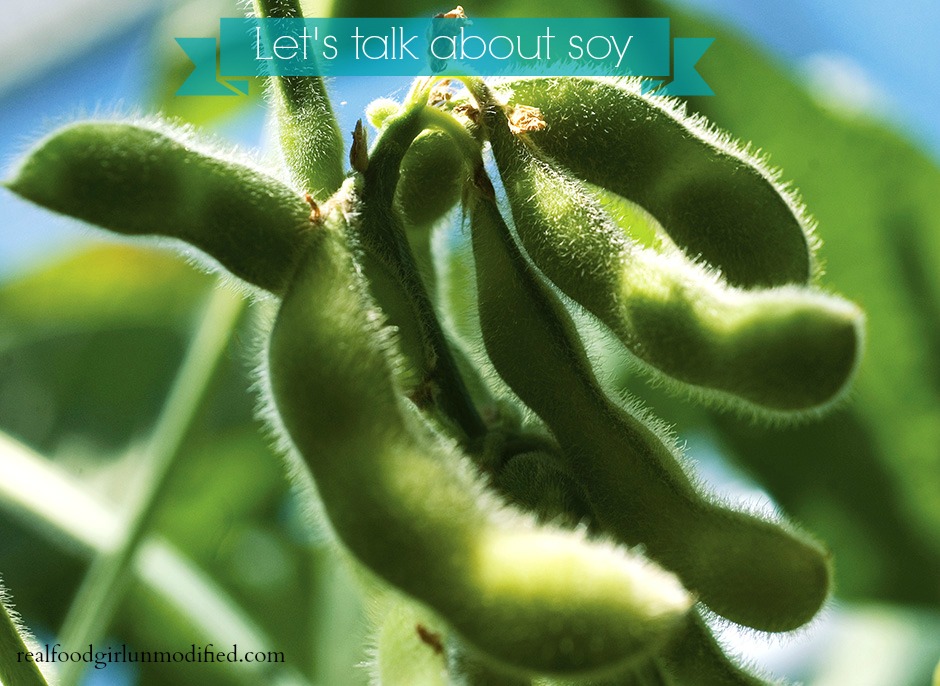 Unfermented– the kind that American’s consume at an alarmingly higher rate by way of:

Fermented– typically what people in Asian cultures consume in the forms of:

Many of the processed soy “foods” you see in the market are created from the waste byproduct of soy during processing, which is soybean oil.

According to Dr. Mercola:

Soy foods contain anti-nutritional factors such as saponins, soyatoxin, phytates, protease inhibitors, oxalates, goitrogens and estrogens. Some of these factors interfere with the enzymes you need to digest protein. While a small amount of anti-nutrients would not likely cause a problem, the amount of soy that many Americans are now eating is extremely high.” It just so happens that soybean oil contains these anti-nutrients. Anti-nutrients are natural or synthetic compounds that interfere with the absorption of nutrients. If you can’t absorb the nutrients you need from your food, you become malnourished.  One sign of malnourishment is obesity. ~Source

You have probably noticed that soybean oil is on the label of almost every single processed food in the grocery store.  It’s almost impossible to avoid. Between the trans fats, the anti-nutrients, and the chemically modified fat molecules, soybean oil isn’t a healthy product at all.  I could probably write another novel just on soybean oil, but I’ll refrain for now.  These articles take a lot out of me and drain my poor brain.  😉

91% of all soybeans grown are genetically modified with the insecticide Roundup in the plant’s DNA.  It’s been genetically altered to withstand increasing amounts of topical insecticides to keep weeds at bay.  The genetically altered plant also contains DNA from bacteria that produces a protein that has never been a part of our food supply. When you eat GMO soy, you’re getting that insecticide DNA along with whatever soy product made from that little bean that you just consumed.

While those in Asian cultures will eat very small amounts of whole, non-GMO soybean products, mainly fermented, we’re eating the unfermented, GMO, fractionated and separated by products of the soybean—mainly the oil.  And there are health risk associated with and being linked to GMO soy and unfermented soy based foods such as: breast cancer, thyroid disorders, kidney stones, autoimmune illnesses, immune system impairment, food allergies, impaired fertility and brain damage.

Dr. Kaayla Daniel has done extensive research into the dangers of soy in her book The Whole Soy Story—The Dark Side of America’s Favorite Health Food .  Just some of the health risks associated with soy include autoimmune illnesses, thyroid disorders, endometriosis, immune system impairment, impaired fertility, and mild to severe food allergies.

If you aren’t up to reading an entire book on soy, Dr. Mercola also has some thought provoking information on soy that I believe is worth looking into.  Both HERE and HERE.

The Benefits You May Not Have Heard Of

Organic fermented soy products, eaten in moderation, are something you should consider, as fermentation is the process that releases nutrients and transforms the soybean into a healthy food.

During the fermenting process the phytate and “anti-nutrient” levels of soybeans are reduced, and their beneficial properties become available to your digestive system.

Fermentation improves the essential amino acid composition in soy making it more healthful; it also creates natural probiotics, which are attributed to a healthier digestive system.  Fermentation also reduces the levels of the harmful isoflavones, which are the compounds that are similar to estrogen and are therefore endocrine and thyroid disruptors.  Fermentation also increases the levels of the very beneficial vitamin K.  In fact, natto is one food that has the highest levels of vitamin K available and contains very beneficial bacteria. ~Source

Unfermented and GMO soy products are not a health food.  Highly processed foods are almost always loaded with chemical and synthetic additives, sugars, MSG, HFCS and the nasty waste by-product of soybeans; soybean oil. It’s not ingredients our bodies were meant to consume.

Fermented soybean products on the other hand are a beneficial food and should be enjoyed, as you desire.  The key is to not go crazy and over consume, which we love to do in America.  Natto- while a highly nutritious meal also contains the highest levels of vitamin K than any other food source, which is also a powerful blood thinner.  So that obviously wouldn’t be something you’d want to go crazy on if you health concerns regarding thin blood.  The fermentation process creates nutrients and enzymes, amino acids and probiotics that are beneficial to our bodies and our ancestors enjoyed many more fermented foods than we do today.

I did read online that whole, non-GMO soybeans that have been steamed or left raw aren’t bad to consume on occasion as many cultures eat raw or whole soybeans on a regular basis.  I’m going to leave that choice up to you. I personally have decided to avoid all unfermented soy.  I won’t fault you if upon doing your own research you decide to consume a little whole, unfermented Non-GMO soy once in a while.

Finally, I wanted to say that I worked hard to ensure that this article wasn’t written in a sensationalistic tone. There is nothing I dislike more than the “NEVER EAT____ it’s the most dangerous thing ever” or “____ causes cancer, RUN FROM IT”, etc., etc.  Sometimes when passionate about a subject it is hard to not come across as a bit of a nut-job, but I firmly believe that unfermented, GMO-Soy is one of the most dangerous “foods” that we can possibly consume.  I say “foods” because it’s genetically modified. It’s got pesticides in its DNA.  Pesticides proven to increase infertility, lameness, and a myriad of hormone, endocrine and other issues within animals (livestock and lab rats and mice) fed GMO soy based feed.

I believe without a shadow of a doubt that my inability to conceive a child is a direct result of all the Genetically Modified freak-food that was introduced into our food supply before researching if it was safe or not, by our ever-caring elected officials.  If that makes me sound a bit like a sensationalist, then I’ll gladly wear the badge.  Based on all my research, all the documentaries that I’ve watched, the books I’ve read, the countless hours scouring the internet, I am convinced more than ever that GMO soy is bad news and if you do wish to consume healthy dishes containing organic soy, go for fermented soy products and avoid the GMO and processed kinds.